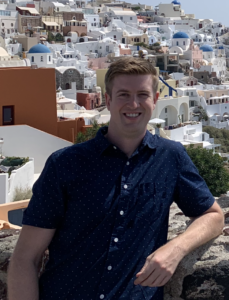 The York Catholic District School Board congratulates Colin Archbell, Department Head of Canadian and World Studies at Our Lady of the Lake Catholic Academy in Keswick for earning the Baillie Award for Excellence in Secondary School Teaching from Queens University.

Archbell received the award as part of Queens University’s Class of 2021 online convocation ceremonies. The prestigious award established by Queens’ Chancellor Emeritus A. Charles Baillie recognizes high school educators who had a formative influence on the post-secondary path of the university’s graduates.  Archbell was nominated for the award by Meghan Tremaine, who graduated from Our Lady of the Lake CA in 2017, and from Queens University with a Bachelor of Arts (Honours), Major in History and a certificate in Employment Relations in 2021.

According to a letter from the university to Our Lady of the Lake Principal, Catherine Rosenberger, Tremaine praised Archbell’s interactive approach to education; “which included placing students in Greek military formations and putting Christopher Columbus’ legacy on trial, prompting her to do historical research in her free time, change her academic plans and choose to study history at university. He also ensured his students were academically well prepared, teaching PSE-level essay formatting and citation styles that Meghan used throughout her degree.

“Mr. Archbell also took the time to speak to his Grade 12 class about safety and the issue of sexual assault on campuses. He then connected one-on-one with his students about the school they were planning to attend, looked up safety statistics with them, and directed them to campus resources and services that would be available if they ever needed them.”

“Mr. Archbell is a wonderful professional and leader who embeds inquiry-based strategies and questioning in his classroom curriculum delivery,” said Rosenberger. “We are most fortunate to have him and teachers like him available to our students at Our Lady of the Lake Catholic Academy.” Archbell has been teaching for 12 years. Upon learning about this award, Archbell said he was very moved to be nominated by Meghan, especially as she had graduated from high school several years earlier. “It is a good reminder that the impressions we make on students can have a lasting impact and shape their future aspirations,” he said. “Receiving this award was certainly humbling, and I hope to be a positive influence in the lives of my students going forward.”